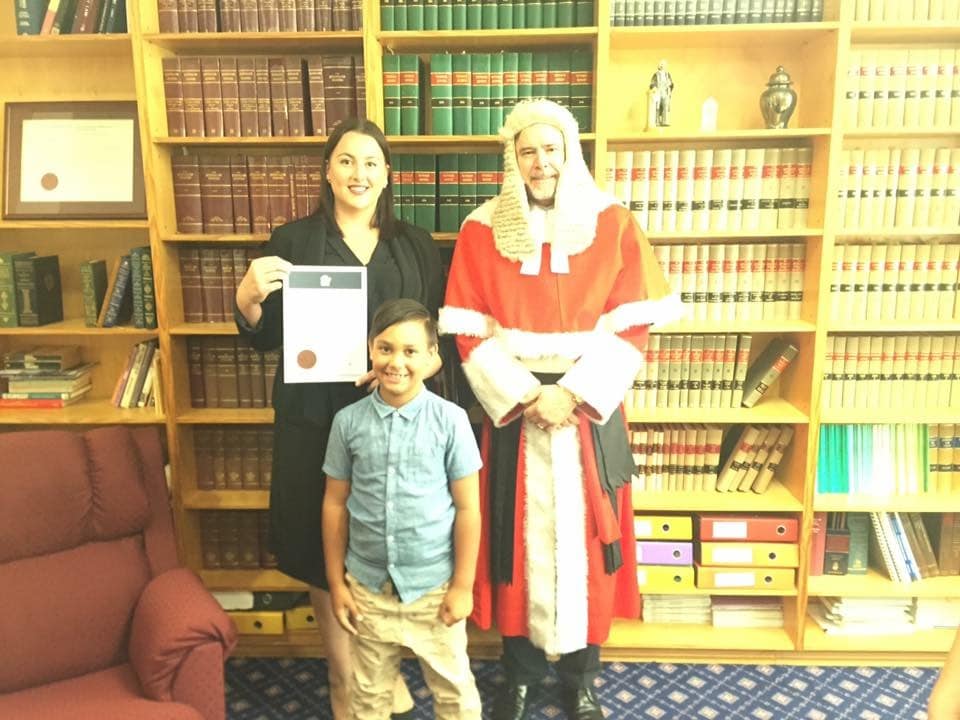 Stephanie Hunt is a Junior Lawyer in our firm, who joined us in June 2015. A recently-admitted admitted solicitor, Stephanie didn’t have any experience in immigration before joining us. Come to that, she didn’t have any work experience in law either. She joined us just with her degree. We caught up with her recently to have a bit of a chat, to find out more about who she is.

Stephanie, admitted as a solicitor. Congratulations!

Unlike the extensive travellers on our team, Stephanie has only travelled overseas once, which was straight after high school. But she has an exquisite appreciation for the world’s cultures and knows that her work is meaningful and important.

‘The work I’m doing is directly affecting people’s lives. Helping them to experience all that Australia has to offer is such a motivating factor for me,’ Stephanie told us. ‘I love the fact that Australia is such a culturally diverse nation. So many good things come about when we are able to interact with and learn from people who have different cultural backgrounds. Being able to help potentially contribute to that occurring gives me immense satisfaction.’

Law is a tough business, one that is notorious for its long hours and high demands, especially on new graduates. The fact that our business isn’t like that was one of the key things that, for Stephanie, makes this firm a great place to work.

‘As a sole parent, my flexible working hours at Richard Timpson are invaluable to me. The fact that I am able to work in the role that I do, with the people that I work with, and carve out a career for myself whilst still being able to be an actively involved parent – and make sure that my son’s needs are fulfilled – is an opportunity that I am immensely appreciative to Louise and Richard for.’

Being able to carve out a career for herself is one thing that is really important to Stephanie. When she came to us, she had no practical experience in law.

‘I feel like Louise and Richard really took a chance on me,’ Stephanie commented. ‘It’s a place where, fresh out of university, I’m working one-on-one with the principal solicitor (and one of only five immigration law accredited specialists in Queensland), as well as within an amazing team of individuals. I am extremely fortunate to be able to work in a place where not only my employment but my personal wellbeing is considered as well.’

Stephanie describes herself as someone who is outspoken, with strong beliefs, and a “get things done” attitude. Organised and prepared, Stephanie is a methodical person… one that, in her off-time is a ‘complete goofball’.

‘I’m a ‘get on with it’ kind of person,’ she stated matter-of-factly. ‘Things happen every day that can make life difficult. You just have to get on with it, otherwise nothing would ever get done.’

So then, how do her friends and family describe her?

‘They’d agree that I don’t do things in halves. They would say that I’m determined (and probably stubborn). And that I’m outspoken in my beliefs.’

All or nothing is the best way to describe Stephanie. Once she’s decided to do something, she’s all in.

Being a working (and often studying) sole parent, Stephanie has an incredibly organised life. It’s something that she finds relieves stress and keeps her moving.

‘I like to run a tight, well-organised ship,’ she told us. ‘I’m forever making lists and rearranging and organising my home. It’s an instant stress reliever when I’m feeling overwhelmed, knowing that everything has a place and/or that I have allocated time for the things that need to be done during the week. It just makes my exceptionally busy week run smoothly.’

The upshot of this is that her weekends are often spent quietly, with her son, with family, or just relaxing.

The past seven years have, for Stephanie, been a whirlwind. She’s studied, had a child, been working, and just living. So, now that she is where she is, what are her goals for the next year?

‘Personal growth and happiness,’ is what she told us. ‘I’m more settled in my role at Richard Timpson and I want to hopefully find some time for me. I want to educate myself on a few things, maybe get back into swimming and horse-riding, and possibly singing. Maybe try and learn a language. I really want to do something that takes me out of my comfort zone.’

For the next 10 years, Stephanie sees herself establishing herself as a solicitor, doing good quality work that gets the kinds of decisions that open up doors and provide new opportunities for clients.

And learning, always a big part of Stephanie’s life, is alongside her long-term goals.

‘I just want to learn and take on-board as much as I can,’ she said. ‘Not only from Richard and his experience, but also from Louise and Dani and their experience. And, importantly, from clients. In my mind, every experience – whether good or bad – is one that you can learn from. If you don’t you’re not taking yourself or your work seriously.’